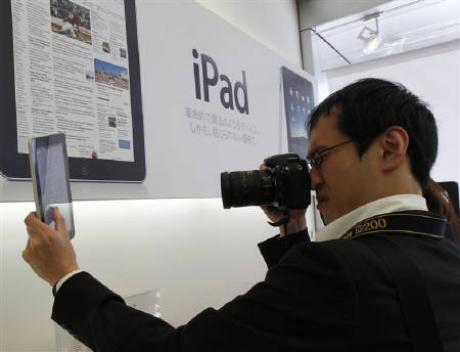 D. Offer writes about the iPad in Tokyo Businesses. Offer operates Chit Chat, a Facebook chat client that enables you to chat on Facebook without a web-browser.

Launched as a rival to notebook computers, the iPad is now being put to the test in Tokyo’s business sector as more and more companies wake up to the possibilities of Apple’s hugely popular product.

Known as ‘the land of the rising gadget’, Japan has long been synonymous with technological advancement. Since its release in May 2010, the iPad has become a fixture with thousands of commuters using the device to kill time, check the day’s schedule and even catch up with email correspondence during the morning rush.

“It has completely changed my commuting experience”, says economist and iPad owner Minako Itaya: “My one-hour journey used to be so boring, I’d sleep or read self-help books” she moans: “But now I read the newspaper, email clients and play games if I have time.”

Other commuters can be seen spending quality time with their social networks, Mixi and Facebook being the most prominent. Another use for the iPad, which is become rapidly more popular among workers, is studying a variety of subjects through YouTube-style video lectures downloaded from career advancement firms and seminar groups.

As well as the many individuals taking advantage of the iPad’s myriad applications, a host of companies, too, are eager to put the portable device to work. In a press release earlier this year, Novarese, a company that provides wedding services across Japan, stated that all of its 14 facilities would be equipped with iPads to help aid customer service through more effective communication.

The company noted that ‘since the introduction of the device to their Ginza branch, the grooms have become far more eager to be involved in the outfit selection process, whereas previously they would pay no attention at all.’

It’s not just wedding service providers that are getting onboard the iPad express. Otsuka Pharmaceutical is getting involved too and plans to distribute 1,300 units to medical representatives who regularly visit clinics and hospitals. In its press release, the company specifies that it see the iPad as the ideal way ‘to boost the speed and quality of information provided by Otsuka Pharmaceutical medical representatives.’

Otsuka is keen to utilize the ipad’s versatility to distribute product information, video content and allow its reps access to medical encyclopedias from anywhere, but that’s just the beginning. The company also hopes to use the device as a tool to allow information-sharing on a global scale in order to provide doctors with the most up-to-date information.

Elsewhere in Japan the tablet computer is forcing its way into the public consciousness, with Tomihiro Art Museum based in Gunma (north of Tokyo) offering visitors the chance to use the iPad as a personal guide that also includes the lunch menu. Even piano lessons at Chubu Gakuin College are being conducted using the iPad rather than keyboards or dated pianos.

Outside of Japan the demand for the iPad as a business tool is growing exponentially, with soccer team Manchester United being one of Apple’s higher profile customers. Players are given tactics and show-reels of opposing players to study at home before big games. Many other sports teams are sure to follow suit, with the iPad suited to almost all sport preparation, from gridiron plays to lynx flyovers.

As more businesses catch on to the potential of the iPad to solve communication and distribution of information issues, the touch screen tablet computer will become a common sight both at home and at work, so be prepared. Rivals to the iPad will no doubt come and go, but Apple’s branding and prestige will ensure that they remain the market leaders in this ever more competitive industry field.