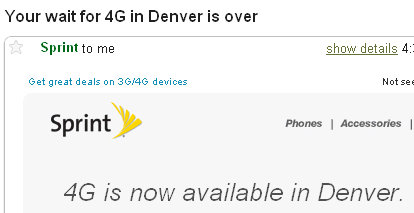 With the arrival of Sprint 4G in Denver, Sprint’s count of cities with 4G coverage rises to 74 cities nationwide – a pretty impressive number.

Sprint’s 4G coverage is powered by Clear, and without a doubt, Clear has the best Sprint 4G coverage map where you can view each city on a Google map, and then also view a comprehensible list below the map.