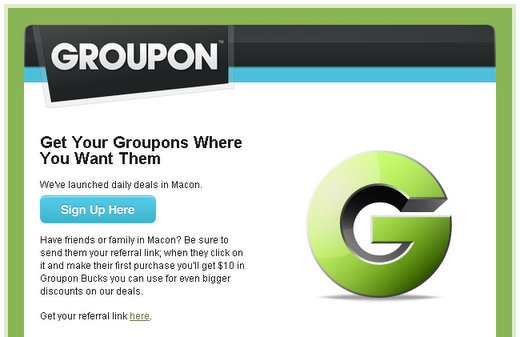 Groupon just announced they will be launching in Macon, Georgia.

Just yesterday, Groupon announced the acquisition of three international daily deal sites that will help them get exposure in India, Isreal, and South Africa.

But despite Groupon’s aggressive growth on the international scene, they are still growing quickly in the United States.

Today, Groupon just announced they will be launching in Macon, Georgia.

Now I’m sure there are other cities that Groupon is launching in throughout the US today, but because I’m subscribed to Atlanta and Athens, I may have specifically been targeted for that message.

Groupon is probably launching multiple cities throughout the U.S. on a daily basis.