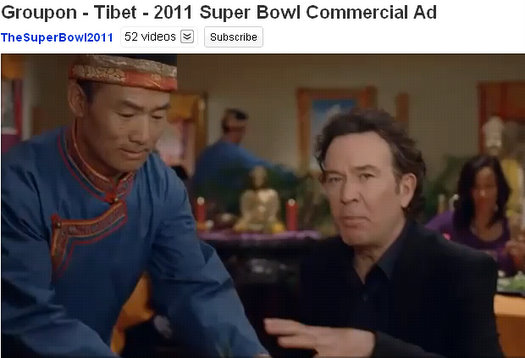 Groupon ran a Super Bowl ad during the second half of the game that has stirred up quite a bit of controversy.

The ad seems to, at face value, insult the Tibet people, culture, and country.

Something that has not gone over well for the daily deals site.

However, according to Groupon CEO Andrew Mason, the intent was to actually raise awareness and bring attention to Groupon’s charity efforts in Tibet.

So to silence the critics, Andrew Mason wrote up a lengthy blog post explaining the reason and purpose behind the commercial.

Without further a’ do – here’s the Groupon Super Bowl commercial:

And here’s Andrew Mason’s blog post in response to the criticism from the commercial:

I’ve been spending the day listening to the negative feedback about our Tibet Super Bowl commercial, and want to take a crack at explaining why we created this campaign.

We take the causes we highlighted extremely seriously – that’s why we created this campaign in partnership with many hallmark community organizations, for whom we’re raising money at SaveTheMoney.org. Groupon’s roots are in social activism – we actually began as cause-based website called The Point, and we continue to use Groupon to support local causes with our G-Team initiative. In our two short years as a business, we’ve already raised millions of dollars for national charities like Donors Choose and Kiva.

When we think about commercials that offend us, we think of those that glorify antisocial behavior – like the scores of Super Bowl ads that are built around the crass objectification of women. Unlike those ads, no one walks away from our commercials taking the causes we highlighted less seriously. Not a single person watched our ad and concluded that it’s cool to kill whales. In fact – and this is part of the reason we ran them – they have the opposite effect.

The firm that conceived the ad, Crispin Porter & Bogusky, strives to draw attention to the cultural tensions created by brands. When they created this Hulu ad, they highlighted the idea that TV rots your brain, making fun of Hulu. Our ads highlight the often trivial nature of stuff on Groupon when juxtaposed against bigger world issues, making fun of Groupon. Why make fun of ourselves? Because it’s different – ads are traditionally about shameless self promotion, and we’ve always strived to have a more honest and respectful conversation with our customers. We would never have run these ads if we thought they trivialized the causes – even if we didn’t take them as seriously as we do, what type of company would go out of their way to be so antagonistic?

We took this approach knowing that, if anything, they would bring more funding and support to the highlighted causes. That’s why organizations like Greenpeace, buildOn, The Tibet Fund, and the Rainforest Action Network all decided to throw their support behind the campaign (read Greenpeace’s blog post here). In fact, the feedback led us to make changes to the end of our ads that further encourage our fundraising. To that point, if the ads affected you, we hope you’ll head over to SaveTheMoney.org and make a donation (which we’ll match) – we’re hoping to raise a lot of money.

The last thing we wanted was to offend our customers – it’s bad business and it’s not where our hearts are.