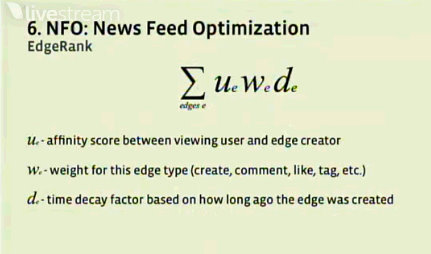 So what’s the ultimate goal of any business using a Facebook Fan Page as a marketing tool?

However, what most businesses (and most people in general) don’t realize is that Facebook’s news feed is driven by an algorithm that determines what updates are seen at the top of the news stream, and what updates are never seen at all.

The algorithm is called EdgeRank.

At the end of the day, EdgeRank will determine whether or not your Facebook Fan Page updates get high levels of exposure, or just get buried in a mound of never-to-be-seen wall updates.

And just like with Google search results, if you can produce Fan Page updates that earn high quality EdgeRank scores, you’ll reap the benefits of massive exposure and increased fans because you’ll be found at the top of everyone’s news feed.

The 3 components of EdgeRank

1) Affinity Score – this is the weight given between the user who is viewing a wall update, and the creator of the update.  The more frequent a “viewer” and “creator” have interacted in the past, the higher the affinity score will be between the creator’s wall update and the viewer.  For example, if you send out an update to someone who interacts frequently with your updates, your update will more likely appear higher and more often than on someone’s wall who has never interacted with your updates.

3)  Time – since Facebook is all about the “here & now”, time obviously plays a huge role in determining what is relevant, and what is old news. The older an “Edge” (or a wall update) is, the less weight that “Edge” carries. Also, any interaction (or other “Edge” interactions) that occur with older updates, the less weight those interactions carry (the less important the “Edge” becomes).

What does this mean to me?

So now that we now there’s an actual algorithm driving the ranking of our updates in our fan’s new stream, we can now take steps to creating higher quality wall updates that will have more authority, and get seen by more people – thus increasing our rankings, exposure, traffic, and fans to our page’s.

Following the underlying concept of EdgeRank, it makes sense that as a Facebook Fan Page admin, you’d want to create more valuable updates that people will actually want to interact with, and create them more often.

If all you send out from your Facebook Page is marketing and promotional type updates (advertisements) then it’s unlikely anyone will interact with your fan page, and in turn, no one will ever see your updates.  This will work adversely toward your goal of leveraging your Facebook Fan Page to build your brand and generate more revenue.

You have to start thinking differently about the updates you send out from your Fan Page, because the “less” interactive potential your updates carry, the less performance you’ll get from your Facebook page.

It’s all about “EdgeRank” my friends – live it, learn it!