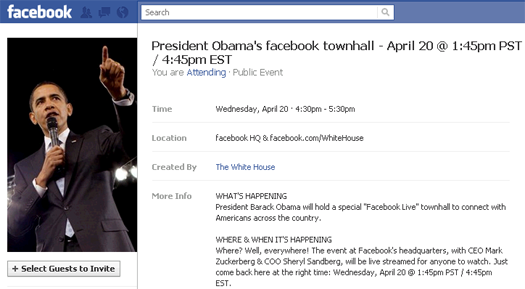 There are already 2,864 people attending the event (at the time of this writing).

Here’s info from the Town Hall event page on Facebook:

WHAT’S HAPPENING
President Barack Obama will hold a special “Facebook Live” townhall to connect with Americans across the country.

WHERE & WHEN IT’S HAPPENING
Where? Well, everywhere! The event at Facebook’s headquarters, with CEO Mark Zuckerberg & COO Sheryl Sandberg, will be live streamed for anyone to watch. Just come back here at the right time: Wednesday, April 20 @ 1:45pm PST / 4:45pm EST.