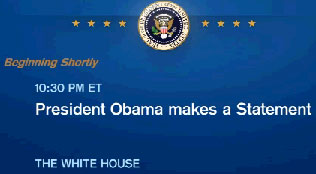 NYTimes: The White House has announced that President Barack Obama will address the American people on a national security issue in the next few minutes. According to a United States official who spoke to The New York Times on Sunday night, Osama bin Laden has been killed. When Mr. Obama begins speaking, his remarks will appear in this live video stream from the White House Web site: