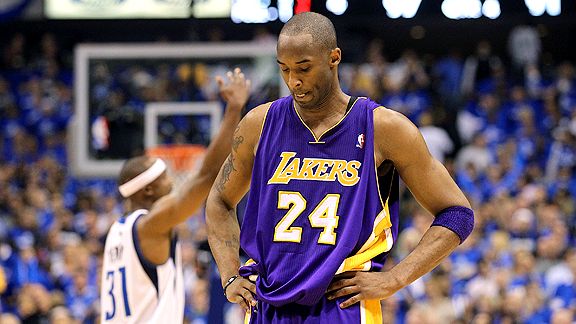 Kobe Bryant and the Los Angeles Lakers find themselves in a most unfamiliar situation. Going in to Sunday nights game against the Dallas Mavericks, the Lakers are actually down three games to zip.

That’s right, the Mavs have won the last three games in a row, putting the Lakers in a situation they are just not quite sure what to do with.

But in great leadership style, Kobe Bryant is ready to step up to the plate and set a new tone for his team as they are facing huge odds of being knocked out the series.

Bryant is quoted as saying this after the loss to the Dallas Mavericks:

“I don’t know, I mean, I might be sick in the head or crazy something like that because I still think we’re still going to win this series”

Certainly we’ve heard crazier things in this life, but these are words that only Kobe Bryant could speak, and have the impact they need to have on the Lakers.

In game 3, the Los Angeles Lakers lost 98-92 to the Mavericks in a game that Kobe Bryant, and the entire Laker’s team, would agree they needed to win desperately.

But according to Bryant, don’t count the Lakers out just yet.  There’s still a game to be played tomorrow night, and we’ll just have to wait and see if Kobe Bryant’s words can motivate his team enough to pull off four straight wins against the Mavericks.