Beneath the cuddly exterior of a panda pumps blood capable of creating a super drug. At least, that’s what Chinese scientists believe. 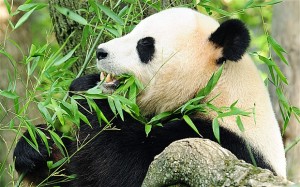 The antibiotic agent within the panda blood is thought to be released by a panda bear when they are at risk of infection. Scientists are calling this agent cathelicidin-AM.

“Under the pressure of increasing microorganisms with drug resistance against conventional antibiotics, there is urgent need to develop new type of antimicrobial agents,” said Dr. Yan. “Gene-encoded antimicrobial peptides play an important role in innate immunity against noxious microorganisms. They cause much less drug resistance of microbes than conventional antibiotics.”

The antibiotic agents in panda blood was found to kill bacteria in less than an hour. Conventional antibiotics can take up to six hours.

The problem is, the panda population has dwindled over the years, primarily due to their bamboo forests being destroyed. In addition, pandas are infamously poor at breeding, since the females only come into season once per year, which only makes the panda population problem worse. Quite simply, farming panda blood for antibiotics would be quite the difficult situation.

However, the discovery of panda blood being beneficial for mankind will most likely lead to further conservation efforts for the creatures. After all, more parties will now have an interest in seeing the creatures not only survive but thrive.

Other powerful antimicrobial agents have been found in snail mucus and some amphibians, but neither of these come close to the power of panda blood.