Earlier this week a British Airways flight on its way from London to Tunis was forced to land due to two drunk women. The women were apparently so intoxicated and disruptive that the British Airways pilot had to divert the flight to Lyon, France, for an early landing. 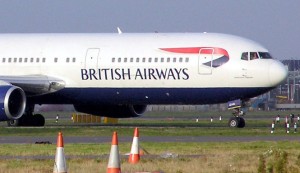 In response to the event, British Airways released the following statement:

“Our customers and flying crew deserve a safe and enjoyable flight experience. We do not tolerate any disruptive behavior onboard our flights. They were handed over to the custody of the French police and detained upon arrival in Lyon.”

Various reports claim the women had been heavily drinking throughout the British Airways flight. After enough drinks, the drunk women began swearing in front of children while storming about the plane. When asked to return to their seats, the drunk women refused.

“They decided they were going to meet the captain and marched towards the cockpit,” said one witness. “It was very frightening.”

Both women have since been banned from ever setting foot on a British Airways flight. In addition, French police authorities placed the women under arrest and locked them in a cell, where they sobered up overnight.

The women were later flown back to London on New Year’s Day, and British Airways officials are looking into the incident to see what happened and how the women were allowed to become so intoxicated.