The Fisher-Price Newborn Rock ‘n Play Sleeper is being recalled due reports of mold. The reports claim the mold is growing in between the seat cushion and the frame of the infant seat. 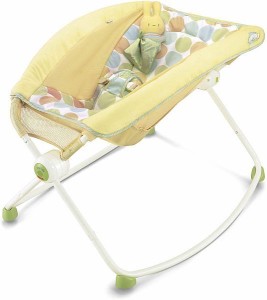 Fisher-Price told the U.S. Consumer Product Safety Commission (CPSC) that it heard from more than 600 consumers about the mold problem. In addition, Fisher-Price claims at least 16 infants have been treated for mold-related medical concerns, including respiratory issues.

The CPSC claims the Fisher-Price recall applies to 800,000 infant recliner sleepers that were sold nationwide and online since September of 2009. The seats are designed to hold babies weighing up to 25 pounds, and the seats typically sold for anywhere between $50 and $85.

The mold apparently forms between the sleeper’s hard plastic frame and the removable seat cushion if the sleeper remains wet or unclean for a prolonged period of time. Consumers are advised to check for dark brown, gray or black spots under the removable seat cushion, as these are signs of mold. If mold is found, stop using the product and immediately contact Fisher-Price for further assistance.

Alternatively, consumers can contact Fisher-Price through their website or via telephone at (800) 432-5437 weekdays between 9am and 6pm EST.

Units currently in retail stores are said to not be affected by the recall warning, but consumers are advised to take caution with all Fisher-Price sleeper products. It’s best to be wary of any company conducting a recall of this size, especially when the victim of the recall is an infant.

Respiratory problems are no joke. If you or someone you know owns a Fisher-Price sleeper, immediately contact them about the mold risk. As the old cliché says, it’s better to be safe than sorry, and you do not want to wake up one day to your infant sharing a sleeper with invasive mold. Gross.