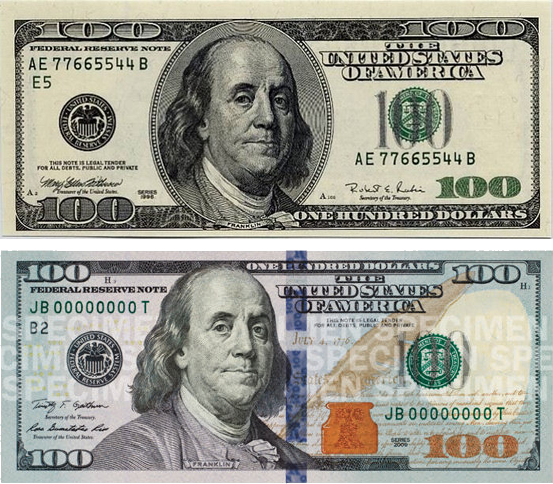 Oh man, the redesign of the hundred dollar bill is here!  Exciting?  Not really, but it’s still kind of cool to see a change.  Looking quickly you’ll notice an inkblot pen, a strip, and multiple colors.  I’m sure there’s more but I haven’t diagnosed it too much.  What do you see that’s changed?

The redesigned U.S. $100 bill will begin appearing after October with new security features that will make it “easier for the public to authenticate but more difficult for counterfeiters to replicate,” the U.S. Federal Reserve said Wednesday.

This bill was supposed to be released in 2010, however there was an issue, which was mentioned by The Washington Post three years ago as:

An issue stemming “… from what officials called a ‘problem with sporadic creasing of the paper during printing’ that resulted in blanks spots on some of the newly redesigned bills.”