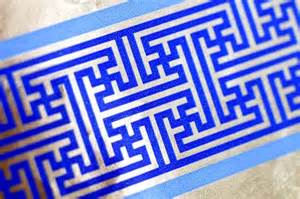 Hallmark Cards had to pull all rolls of their Hanukkah wrapping paper off shelves after customers notified them the pattern appears to have swastikas printed on the wrapping paper.  The blue and white Hanukkah (swastika) paper was something that passed by approvals without noticing the pattern.

“We apologize for the oversight and apologize to anyone who was offended. That obviously was not our intent. It was an oversight on our part to not notice the intersecting lines that could be seen as a swastika pattern.”

Elliott said the gift wrap’s print was based on a design in the Hallmark archives that drew inspiration from an old Chinese vase, The Kansas City Star adds.

After looking at the pattern, it does take a little while to notice the swastika pattern.  It’s not to surprising it got through. It seems to look like a greek key pattern when you look at it quick.  Embarrassing for the designer who let that one sneak by though :(