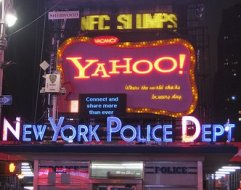 Just hours after Google announced they’d be offering free WiFi in airports throughout the US during the holiday (see list of airports here), Yahoo came out with their own WiFi Christmas gift.

Yahoo said Tuesday it is partnering with the Times Square Alliance to bring free Wi-Fi service to over half a million people that frequent Times Square daily for one year.

The Wi-Fi service will be accessible on both PC’s and smartphones.

To kick off the service, free coffee was offered at the Time Square Internet Cafe on Broadway Pedestrian on Tuesday. [source: IBT Tech]

The Push For More Wi-Fi

The news today between both Google and Yahoo offering free wifi service is just the starting point for a push to a global cloud of Wi-Fi.

So what better way to facilitate more ad impressions than to invest in making the Internet more accessible in more places – and have it all be FREE to the user.

I’m of the opinion that one day, in the not too distant future, we’ll see the entire world under a Wi-Fi cloud – and it will be 100% Free!

I also believe that devices like laptops and mobile phones will be offered for free from companies like Yahoo and Google as well.

Because the more people who have these devices brings more accessibility to the web.  And with free Wi-Fi all over the world, then people will literally be on the web all the time and everywhere.

But for now, you’ll have to get your free Wi-Fi in Times Square and in all major US airports.