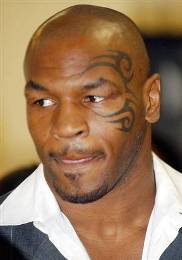 Mike Tyson In The News

So while I’m waiting for some videos to upload to YouTube, this Mike Tyson story hit the web and for some reason caught my attention.

Apparently Mike Tyson, his wife, and their 10 month old child were in LAX and a member of the paparazzi rushed Tyson to get a picture.

Tyson claims that in an act of self defense, he hit the guy.

So Tyson was detained on battery charges, and both the paparrazi and Tyson are pressing charges – on each other!