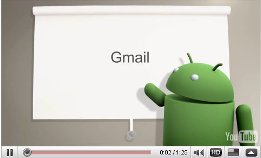 The web is on fire today with Google announcing their Nexus One Google Phone.  Google is positioning themselves in every way possible to dominate the mobile web.

Right along with the announcement of Nexus One, we are now seeing Google launch tutorials on how to use Google products on the Nexus One such as Gmail.

Here’s more from the official Gmail blog on how to Gmail integrates nicely with the Nexus One Google phone:

Not only does the just-announced Nexus One have a beautiful display, snappy processor, and five megapixel camera complete with flash and geotagging, but you can also buy it online with or without a service plan. Plus, it runs Android 2.1, which adds a couple of new features to the native Gmail application:

Nexus One also features the Gmail updates of Android 2.0, including:

Here’s a video from Google as well featuring Gmail on the Nexus One Google Phone:

is this real push email?

does it work really push like bb or not?