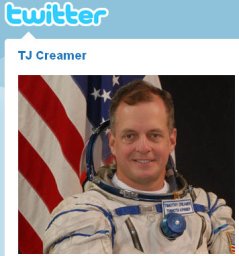 NASA astronaut TJ Creamer made history last week when he sent the very first tweet from outer space.  And yesterday he made another claim to fame by tweeting the first every breakfast order from outer space.  Responding to a question about what he had for breakfast, Creamer tweeted “this morn I had granola with blueberries, and a vegetable quiche (both re-hydrated & very tasty).”  And apparently Mr. Creamer is enjoying having WiFi on the ISS (International Space Station), because he has been quite active on Twitter answering people’s questions.  And his Twitter followers have exploded from only around 5000 on Sunday, to well over 26,000 right now. 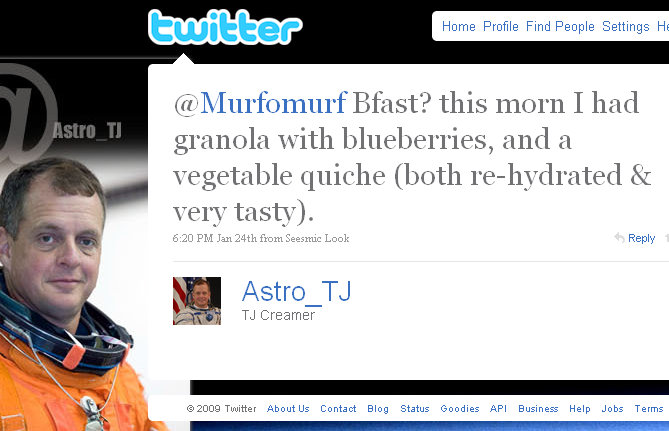 It’s really quite interesting to read through all of his tweets as he answers a lot of different questions from readers.  What’s even more amazing is that because of Twitter, we are now able to communicate directly with astronauts that are in outer space.

A couple of his tweets that caught my attention where the ones that referenced resources for viewing pictures.

For example, you can view images of the current mission here.

You can see opportunities for space station sightings here.

And also a lot of photos are available here.

NASA astronauts have posted Twitter messages in the past, but they first had to be relayed to Mission Control via email, and then engineers would send out the tweets from their computers.

Now, residents of the ISS can post directly to the micro-blogging site thanks to a new, direct Internet connection.

Dubbed the Crew Support LAN, the system relies on existing communication links to give astronauts full Web connectivity. The crew also has access to e-mail, VoIP, and videoconferencing tools.

NASA said the astronauts posts are subject to the same guidelines that cover government employees’ use of social media on terra firma.