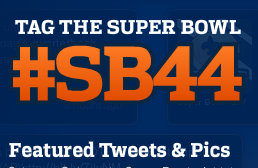 I would say that user generated content has moved to a new level of prominence in our society with the recent moves by the NFL.  Straight from their official website, the NFL has launched a Super Bowl 44 Twitter montage for fans.  This page basically aggregates the updates from Twitter that uses the NFL’s self proclaimed tag #SB44. Want to be a part of the official Super Bowl 44 Twitter montage on the NFL website?  Just send out a tweet or picture with the tag #SB44 and you’re in.

What’s amazing about this story is that the NFL is purposely not editing any of the content and Twitter updates.  This shows the importance of social networking sites like Twitter, but more importantly, the relevance of integrating fans comments / user generated content into the NFL experience.

The NFL knows who pays their bills – it’s the fans!  And they are now inviting the fans to become a more intricate part of the NFL.  From the NFL Twitter montage page:

Celebrate Super Bowl XLIV through the experiences of fans in South Florida and the rest of the world. Explore photos and tweets from fans tagged #SB44, the official tag of the Super Bowl. Want to be included in the experience? Make sure to include #SB44 in your Twitter posts and tag your photos on Flickr. Then come back often to see the excitement unfold!

And then, directly underneath that inviting paragraph, the NFL continues with their disclaimer about the un-edited user generated content:

So there you have it – the NFL is telling you that if you have a problem with anything you see on the montage, then take it up with Twitter or Flickr.  The only time the NFL will step in is when you are in one of the NFL stadiums and trying to share photos.

I’m excited to see if the #SB44 tag will make it to Twitter’s trending topics list.  I believe it will, but I don’t think we’ll see until a few days before the game.

Perhaps we can taking wagers on when we’ll see the #SB44 Twitter tag hit the trending list….

Let me start it off by predicting we’ll see #SB44 on February 4th – 3 days before the game.

What do you think?  When do you predict we’ll start to see the #SB44 tag hit Twitter’s trending list?