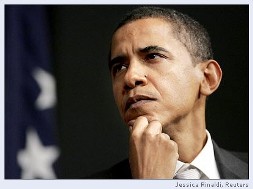 About one week after President Barack Obama made his case of lower deficits to the American people during his State of the Union Address, he presented a $3.8 trillion dollar budget to congress.  And there is really only one word to describe the reception that his budget received, especially amongst Republicans – “BLASTED!”

President Obama’s multitrillion-dollar spending plan will boost the deficit to an estimated record-breaking $1.56 trillion.  Something that seemingly goes directly against his plan to reduce the budget – to say that very least.

The USAToday is reporting that “Republicans who spent the past year criticizing Obama’s $862 billion economic stimulus package, said the president was being spendthrift by raising the overall budget 3%.”

What are your thoughts about the President’s $3.8 trillion dollar budget?

Do you feel that the President is being responsible toward the goal of reducing our national deficit?