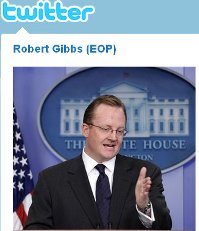 From his brand new Twitter profile, Robert Gibbs, The White Press Secretary, has launched his second Twitter update today.  And from his Twitter update, he said that he was settling in to watch the Sunday talk shows, and also encouraged people to follow a particular link to an article of interest.

This is what Robert Gibbs tweeted:  “Settling in to watch Sunday shows – sure to hear lots of talk on counter terror – hope everyone read thishttp://bit.ly/aviOw2”

If you follow that link, you’ll be taken to an AP article that discusses President Obama’s anti-terrorism strategies, with focus on CIA drones and their effective use at killing terror suspects.  One of the most recent successes from a CIA drone aircraft was the killing of Baitullah Mehsud, the ruthless leader of the Pakistani Taliban. He was to be eliminated.

According to the Associated Press, Mehsud was Pakistan’s public enemy No. 1 and its most feared militant, responsible for a string of bombings and assassination attempts. But while Mehsud carried out strikes against U.S. forces overseas and had a $5 million bounty on his head, he had never been the top priority for U.S. airstrikes, something that at times rankled Pakistan.

“The decision was made to find him, to get him and to kill him,” a senior U.S. intelligence official said, recalling weeks and months of “very tedious, painstaking focus” before an unmanned CIA aircraft killed Mehsud in August at his father-in-law’s house near Pakistan’s border with Afghanistan.

So Robert Gibbs, according to his Twitter posting, is expecting to hear the talking heads hammer President Barack Obama on his anti-terrorism strategies, and his execution of the war on terror.

But from reading the article that Robert Gibbs mentioned on his Twitter update, we (the United States) seems to be a path of trying to smarter about the war on terror, killing more of the key leaders, without sacrificing American lives.

I’m really glad to see people like Robert Gibbs, The White House Press Secretary, on Twitter.  It allows people to gain a better understanding of the current issues – even though we are also let in on the fact that Mr. Gibbs is about to sit down to watch some TV!