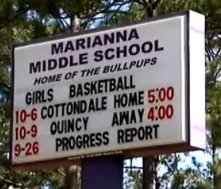 Question – what’s the fastest way for a teacher to get fired?

Answer – use a racial slur against The President of the United States in front of students.

I understand that the political debate is intense at the moment in Washington DC.  With issues such as health care reform and dealing with record high unemployment, emotions can run high.  But when you start using racial slurs against President Barack Obama in front of high school students, then you’ve really gone too far.