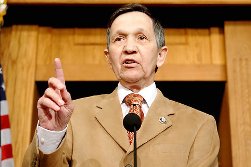 That’s exactly what Rep. Dennis Kucinich has decided to do with his vote on Obama’s health care reform bill.

Kucinich, a Democrat, was one of the load roaring voices within the Democratic party that stood against President Obama’s health care reform.

But because of mounting pressure from the Democratic party, and from President Barack Obama himself, Kucinich has changed his mind and will “reluctantly” vote for Obama’s health care bill.

From the NYDailyNews.com, “I have taken this fight farther than many in Congress have been willing to take it,” Kucinich said, arguing that he owed it to his constituents to push for a single-payer health-care system that ends the power of insurance companies.

But, he said, “In the past week, it’s become clear that the vote on the final health bill will be very close.”

And he does not want to be the one who scuttles reform, even if he doesn’t think it’s good enough.

“After careful discussions with President Obama, Speaker Pelosi, my wife Elizabeth and close friends, I’ve decided to cast my vote in favor.”

Man… what a disappointing day indeed to know that our elected officials in Washington are caving in to pressure, and casting a vote for a bill they truly do not believe in.