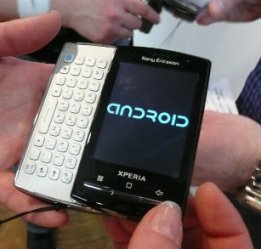 
The speed in which Android is integrating the marketplace is unprecedented.  Mobile phone makers across the entire spectrum are integrating the latest Google Android mobile operating system, and releasing devices running Android at lightning speed.

Today, Sprint and HTC have both announced that they will be releasing 4G speed handsets running on the Android 2.1 operating system.

The HTC Evo 4G has the latest version of Android, 2.1, with built-in apps like “Google Goggles,” which allows users to take a picture of a book, wine label, landmark, or virtually anything, and receive instant information from the Web about the item.   Basically, all a user has to do is snap a picture with their mobile device, and then a Google search query is initiated based on the contents of the image.

The Google Goggles technology is nothing less than spectacular!

Additionally, the Evo mobile device has a 1 GHz Snapdragon processor, an 8-megapixel camera with HD video capability, and a built-in Wi-Fi hotspot. Users can use it to connect to the Internet on a nearby laptop or any other Web device.

On top of all that, all the regular functionality of Android like voice-to-text searching and thousands of Market apps, will be available at speeds of up to 10 times what the other 3G Android phones can do.

Sprint’s 4G network, which was the first of its kind to be rolled out in the country, is currently available in 27 markets in the US.

The Evo is planned for a launch in the summer.

Stay tuned for the latest Android news and information.