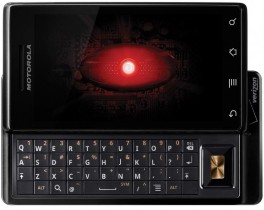 At the end of last week, Verizon started the process of updating their Motorola Droid phones with the latest Android OS – Android 2.1.

Android 2.1 is the latest version of Google’s Android mobile operating system, and the 2.1 version has been running, and comes standard, on Google’s Nexus One phone.

But now Verizon is slowly starting to roll out the Android 2.1 update to their popular Motorola Droid phone. The roll out upgrade to the Motorola Droid started at the end of last week and will continue to expand to more Droid users.

According to ZDNet.com, the Android 2.1 update has been causing major 2D slowdowns on the Motorola Droid phone.

They also released this video showing has Android 2.1 was slower than the previous Android version:

The only problem with the claims in the video above is that the phone was upgraded manually to the Android 2.1 OS by using the instructions posted at MobileCrunch and the update image hosted at google.com.

Even though they claim that the update is the same that is being released by Verizon, I would say that the Verizon update should probably be the one to use since it is designed specifically for Verizon’s network.

Anyway, the Android 2.1 update will only take about 15 seconds once you start the process. If you own a Motorola Droid, you will receive a message asking you to update your phone – simply follow the steps and that’s it.

What do you think – are you finding Android 2.1 to be slower than your previous version of Android?

Everything actually seems a little faster to me. The screen seems more responsive and more fluid.

1. I concur with "DroidUser" – does seem a bit snappier to me as well. No benchmarks run or anything, just gut feeling after using 2.0.x since November 6th.

2. While I can appreciate the notion of using OTA software in comparison benchmarks, the truth is the code applied in a manual update is the same code as the OTA. The difference between OTA and Manual updates isn't the code itself, it's merely the mechanism to install the code on the phone. I think the way you've written your piece may lead some astray in thinking the software in a manual update is somehow rogue. Make no mistake, a typical "manual application" of 2.1 is *not* rooting, for example.

I wish verizon would send me mine so I could tell you my opinion :(

I’m definitely pleased with the update and feel that it is overall quicker across the board. No complaints here.

I think the update is great and I did it the approved way. My Droid is as fast as it can be and battery life seems better. I think the Droid is a powerful phone/computer. It is truly awesome. When it gets flash it will be perfect.

I agree. I’ve had no issues with the update and my droid is working a little faster.

I was excited this morning to see the would you like to update on my screen, pressed install phone froze and didn't update. I no longer have the option to update.

Just updated…gallery is different. It was a tad slower when I started my phone and started to tinker. Very dissappointed the update didn’t include flash…

Still wondering what else was updated!

Upgraded via OTA night before last. Phone seems much faster.

1 huge upgrade…voice recognition in the keyboard. Not perfect but works pretty well.

I too was excited to see an upgrade, this morning. After running it, I was stuck on the flashing red eye boot up screen. After removing the battery and trying to restart I get no response at all. Now I have no phone. I wish I had never touched this update. Why do i have this feeling I will get no help from Verizon either. Verizon will say it's Motorola's hardware… Motorola will will say it's Google's software… Google will say "You bought the phone from Verizon".

I should have bought the iPhone instead of messing with the cheaper wannabee !

I’ve got no problems kevin.

my phone has been stuck on the load screen of red eye and droid for 4 hours. i tried the volume up and camera button and nothing is working. any suggestions???????

Ever since the update I am no longer able to use my phone while charging it. Touch screen flickers when pressing an icon and will not open app.

Nice blog at socialmediaseo.net. I love Motorola phones. I am in Canada and I just bought Motorola Milestone, which is known as the Motorola Droid south of the border. I love Android operating system which is way faster than Windows mobile.