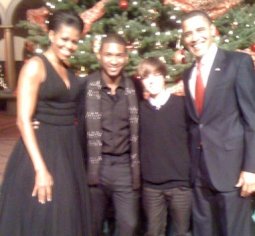 So let’s count the number of 16 year olds who have met with the President of the United States not just once, but on two different occasions.

Well, there is one actually, and his name is Justin Bieber.

In fact, one of those times Justin Bieber was invited directly into The Oval Office to hang out with President Barack Obama, take some pictures, and just chill out I guess.

Here’s what Justin Bieber had to say about hanging out with President Barack Obama in The Oval Office at the White House:

“I got to hang out with him in the Oval Office, which is pretty crazy, because no one really gets to go in there,” he said. “But it was pretty incredible. I got pictures with him.”

The two times that Justin Bieber has met and performed for President Barack Obama was when he took the  stage in the Washington D.C.  in December where he performed along with mentor Usher for “Christmas in Washington.”

Not too bad for being 16 years old and already hanging out with The President of the United States in The Oval Office!

hey wow you are so lucky to get see and know obama:) lol i love justin beiber:)!!!

i love so much u r my s*xi baby

beyonce is a lez

beyonce is a lez