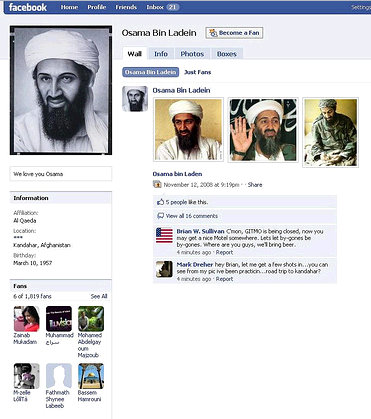 Al-Qaeda leader Osama bin Laden’s Facebook profile has been shut down due to security issues raised within the United States.

In a statement issued by  Facebook spokesman Andrew Noyes, Facebook could not determine if the profile actually belonged to Osama bin Laden or if it was fake.

According to Fox News, Osama bin Laden’s Facebook page was called “The leader of the Mujahideen, Osama bin Laden”, and he used it as a platform to show videos and speeches to Islamic militants.

Reports state that the site contained numerous images, dozens of video clips of bin Laden and scenes from films issued by terrorist groups worldwide. One showed a group of al-Qaeda fighters undergoing training in Afghanistan, which was produced by the terror network’s official media arm As-Sahab Media.

Another showed a clip of bin Laden lecturing his followers in Afghanistan just before the 9/11 attacks.

“People often attempt to register fake accounts under the name of famous or infamous people, and we have a number of technical measures designed to prevent this behavior,” Fox News quoted Noyes, as saying.

“Sometimes these fakes do get through, but there is no evidence to suggest that the account in question or the other dozens of people who have tried to present themselves as Osama Bin Laden have any relation to the terrorist. As is our standard practice, we have disabled the account,” he added.

The account became active less than a month ago, but had already attracted nearly 1,000 extremists, and although the language used was Arabic, messages in English had started to appear.

Social Media being used by criminals and organizations

I wrote back in November about how gangs in New York City were using private Twitter profiles to communicate with other gang members and set up rivalry battles throughout the city.

And now with the report of potentially Osama bin Laden using Facebook to communicate with his terror network, it is clear that social media is becoming the choice platform for communication and collaboration.

You’re kidding me right ? Yet more boogeyman propaganda from the media … Osama using facebook to communicate with hiz terrorist network ?!?!?! Ooooooo, gimme a break what a stupid joke. People terrorizing this country and threatening its way of life … tend to congregate in washington … not afghanistan. Have the american public scared of its own shadow.

Another bad joke that the average john/jane US public will eat up. Lock your doors, Osama’s been using facebook !!! Wake up people, what a stupid thing to push off on anyone with more than 73 braincells.

Even if it werent just another ridiculous site on the internet … if there were anything to it. They shouldve kept the site alive, so it could be monitored and mined for information etc.

Ahhh land of the free home of the brave … where we have freedom of speech … unless it offends someone, which anything you say will offend someone … esp since the truth is becoming such a horrible thing. Nobody even wants to discuss it … or think about it.

Wouldnt be surprised … if anyone, who even jokingly visited that fan page … has an illegal wiretap on their phone and compline, ( in complete and total disregard of the US constitution ) or a black van fulla over paid feds … sitting down the block from their houses.

OOooooo, What did his facebook fan page say ? I bet it was all tricked out … instead of a like me button … it probably said “like me or I kill you” … ohhh and I know, he probably had a tab like …. “super secret terrorist chat, no infidels allowed !!!” And a contest tab … giving away the latest model of suicide bomber gear … a big ole splash page when ya clicked on it. …. all your suicide bomber friends will envy you when they see you in this !!! Sign up for our weekly newsletter … the “death to infidels weekly”.

Sheesh, could people be any dumber or naive. As for facebook, dont really like them … as with most the internet gaints. They think they can act however they want, treat users however they want … which is par for the course with major corporations in any sector/industry. Speaking of corporations … wish more americans would start thinking for themselves … instead of being told what to think by the american corp media. Cause what they tell you is going on and what’s actually going on … two completely different things. :D