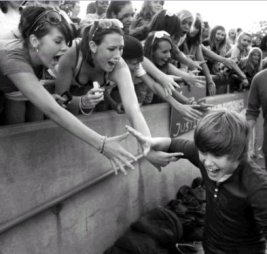 But you’ll have to get in line behind two ladies that Justin Bieber has already said that he wants to date.

I think though that Beyonce and Kim Kardashian are both like at least 20 years older than Justin Bieber, so they might not quite be interested in the young pop star.

But then again, from the responses that Justin Bieber receives from his worldwide fans, maybe they would re-consider dating Justin Bieber just this once.

Ladies all over the world wish they were Justin Bieber’s girlfriend. Many young ladies will stand in line all night long, endure inclement weather, and and go with out sleep just for the opportunity to get only one photo with the pop super star.

According to MTV, Justin Bieber was asked whether he had any celebrity crushes and the 16-year old said: “I can pick any girl… I’m gonna take Meagan Good. I’m gonna take Kim Kardashian. And Beyoncé.”

And so there you have it, Meagan Good, Kim Kardashian and Beyonce.

Out of hundreds of millions of fans that wish they could be dating Justin Bieber, these are the three that he expresses an interest in.

Like I said before, this by no means implies that any of these three ladies are even remotely interested in 16 year old Justin Bieber.

One thing is for sure with Justin Bieber, he seems to prefer older women.

I dream of going to hollywood and meeting him

It is so far… far away to see Justin Beiber Physical but by listening to his songs often I believe he is with me. Just imagine , Papua New Guinea is some million milles away from America and it is impossible as human beings can think but in reality if we have have faith then it is possible.
I believe, one fine day I will go to America and see justin Beiber with my eyes. Anywhere, we are in a world of dream so sometimes dreams can come true.

Thankyou, and meet you there sometimes.

Justin is an idiot. Beyonce is married. I also doubt Kim is into 3 inch little boys.

SEIANNA :like omg justin bieber is soooo cute. I wish he was my boyfriend!!!;)

wtf justin bieber is so hot hoter than cute
and i know every one wants to be his girlfriend but i dont because
everyone alfer him and i think everyone likes them because
idk its so hard to expain but no girls were like alfer them like that
un tell he been a signed to usher that musted hard
!!!!!!!!!!!!!!!!!!!!!!!!!!! justin bieber so goood !!!!!!!!!!!!
at going thew all that i would i would miss my life

justin bieber i love you i from mongolia

It is incredible to see many fanatics could easily be brainwashed and manipulated by this 16 yrs old kid’s love/flirtatious songs for his own benefit. He is running a business and he is expanding it just like other business in the market does. It is almost like growing a tree that starts from the root. Justin Bieber’s roots started by his mom on Youtube and he was used as a tool by his music manager Scooter Braun for Scooter’s earning and now he is a tool by many other people included these older women who took photo with him. It like as if he allowed himself to be abused or to be used as a tool for others’ benefits in the media and business world and also for his own benefit. It is like a business deal and these retarded fangirls are giving him more money by buying his magazines about his secrets, viewing his websites like his world tour, buying his music records/CDs (also Scooter Braun would earn money), viewing controversial magazines /topics he made up (which could be misleading/false), buying his T-shirts, calling his private phone (he would earn more money but risking to crash telephone service), and so on. He is a tool and a business whore because anyone can use him for their own benefits which might also benefit himself too as a business deal and some deals could be dirty and controversial to the media. How can people be so stupid and crazy like this? It is a shame. We don’t have to treat him like a DemiGod. It is a cult culture and mob mentality. Get over it because he does not really care about you crazy fangirls or fanatics but he cares for his own business and he is trying to be controversial to gain more public spot light so his popularity would grow bigger.

It is also possible that Kim Kardashian paid dirty money to Justin Bieber to have dirty s*x. Some older women does that because they wanted to have s*x with younger boys. However the boy could put her into trouble to earn more money by allowing his mother to file rape charge against Kim if he really have evidence but it is not easy for him since this is a “Boy on a Woman” but if it is vice versa like “Man on a girl” then it is a different story because the evidence like sperm could be taken easily to file rape charge. You know what I mean.