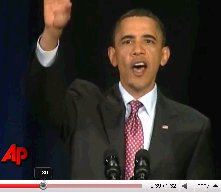 President Barack Obama was in California today at a campaign fundraiser for Democratic Senator Barbara Boxer.

During President Obama’s visit to California, he gave a speech in which he started talking about the military’s “don’t ask don’t tell” policy. That is the policy that currently prevents gays from serving openly in the United States Military.