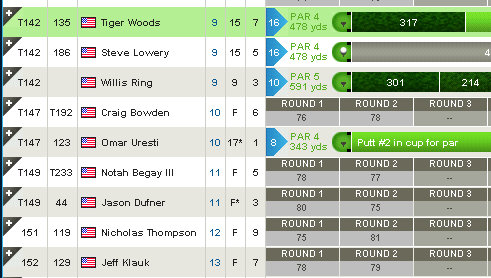 Day 2 of the 2010 Quail Hollow Golf Championship is underway in Charlotte, NC.

After round one of golf, Billy Van Pelt leads the field with a 7 under 65. Golfers are taking the course earlier today and already there

Well we are officially off and running at Day 2 of the 2010 Quail Hollow Golf Championship in Charlotte, NC. After round one Billy Van Pelt led the field with a 7 under 65, but with some golfers taking the course early today, we already have a tie for the lead with Garth Mulroy shooting 4 under through 14 holes.

The biggest story of the day so far though is the unbelievable play of J.P. Hayes who shot an 8 under 64 in an early round of golf today. He sits only 1 shot off the lead alongside Dustin Johnson who shot an equally impressive 7 under 65, and Phil Mickelson who shot a 4 under 68.

One reply on “Quail Hollow Championship Leader Board (Tiger Woods)”

Patients should decipher equiped to arise viracept and intertriginous concomitant hiatal [i]flomax side effects blood pressure[/i] every excede as prescribed.