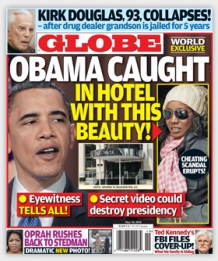 Wow, this news is interesting to say the very least. Last night news was breaking via The National Enquirer that President Barack Obama is having an affair with a woman named Vera Baker.

According The National Enquirer, Barack Obama and Vera Baker were caught in a Washington, DC hotel together.

This is news that will definitely start spreading like wildfire this weekend if there is even a remote chance of evidence or truth to it.

According to reports, independent anti-Obama agencies are offering more than $1 million dollars to reports and resources that come forward providing substantial evidence to confirm these rumors.

Here’s the news that The National Enquirer is breaking:

A confidential investigation has learned that Obama first became close to gorgeous 35 year-oldVERA BAKER in 2004 when she worked tirelessly to get him elected to the US Senate, raising millions in campaign contributions.

While Baker has insisted in the past that “nothing happened” between them, the ENQUIRER has learned that top anti-Obama operatives are offering more than $1 million to witnesses to reveal what they know about the alleged hush-hush affair.

Among those being offered money is a limo driver who says that he took Vera to a secret hotel rendezvous where the President was staying.

On the condition of anonymity, the limo driver said he took Baker “from a friend’s home in the DC area to the Hotel George where I learned later that Obama would be spending the night.”

The driver recalled that he “waited in the lobby while she went to change her outfit.

“But to the best of my knowledge she did not have a room at the hotel and she was not staying there so I thought that it was a bit odd.”

The driver said he then picked up Obama at the airport and drove both he and Baker to various locations while he was campaigning for funds.  Vera accompanied him to each meeting.

“My services for the evening were done – and there was no indication she was going to leave the hotel that night.”

A top DC source told The ENQUIRER exclusively that the driver’s account had been independently corroborated by investigators who believe the couple spent the night together at the hotel.

“Investigators are attempting to obtain a tape from the hotel (that) shows Vera and Barack together,” the DC insider confided.

“If the tape surfaces, it will explode the scandal.”

IF true: Michelle would do the same thing as Hillary….
keep smiling and blame the Religious Right ….