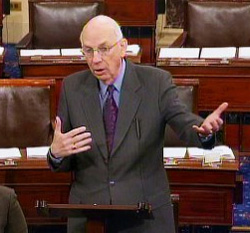 The republican party continues to pursue a path of restructuring and rebuilding their party from the inside out. This restructuring continued today with the Republican Senator Robert (Bob) Bennett.

The Wall Street Journal reports that Republican Senator Robert Bennett of Utah on Saturday became the first incumbent U.S. senator to drop a re-election bid this year after losing a vote for his party’s nomination.

The three-term senator, hurt by anti-incumbent sentiment and unpopular moves he made in Washington in the past few years, failed to secure enough support from the 3,500 delegates at the state GOP convention here.

Unlike most states, Utah has a nominating system in which delegates winnow down their party’s field of candidates before a primary election. Mr. Bennett was eliminated from the Senate race in the second of three rounds of delegate voting. He finished third in the vote; only the top two advance to the final round.

The remaining candidates, businessman Tim Bridgewater and lawyer Mike Lee, will compete in a June 22 primary. Running on populist platforms, they both have backing from tea-party supporters and have pledged to reduce the federal government’s size if elected.

Is The Tea Party Gaining Momentum?

With the ousting of Robert (Bob) Bennett and looking at the remaining two candidates Tim Bridgewater and lawyer Mike Lee, we are perhaps seeing the support of tea party movement voters growing larger in influence.