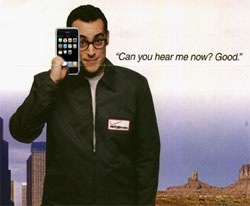 Breaking news and rumors, that’s what the web is all about! Well today a very juicy bit of information has found its way onto the web and it has to do with Apple, the iPhone, Verizon, and AT&T.

This would indicate then that we’d see a Verizon iPhone by the end of the summer, and perhaps even an iPhone 4G at Verizon.

A report out yesterday showed that the iPhone was being outsold in the United States by smartphones running Google’s Android OS.

The report, originated by NPD.com, states that Apple’s iPhone has been bumped nto third place by Google’s Android OS.

BlackBerry has 36 percent of the market, with devices running the Android OS 28 percent and iPhone 21 percent, the NPD figures claimed. It seems Verizon has been pushing iPhone alternatives as it competes against AT&T, which offers the iPhone.

“As in the past, carrier distribution and promotion have played a crucial role in determining smartphone market share,” Ross Rubin, executive director of industry analysis for NPD, said in a release noting the effect of Verizon’s iPhone-less labors.

“In order to compete with the iPhone, Verizon Wireless has expanded its buy-one-get-one offer beyond RIM devices to now include all of their smartphones.”

So without stating the obvious, Apple needs to figure something out with the iPhone to get it more traffic and exposure. And keeping it under a tight lid at AT&T is not the kind of strategy I had in mind.

But then again, Apple has always shocked and surprised the world with things it does – so it will be interesting to see if a Verizon iPhone 4G isn’t here by summer’s end!