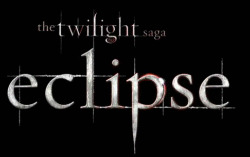 From the worldwide bestseller Twilight by Stephenie Meyer comes the newest movie Eclipse set to premiere June 30, 2010.  Edward Cullen, Bella Swan and Jacob Black starring Robert Pattinson, Kristen Stewart, Taylor Lautner and Dakota Fanning.  The Twilight Saga all revolves around Edward and Bella and Jacob. Bestselling author Stephenie Meyer says, “The love triangle for me is about fantasy love and reality love.” The bottom line is, What will Bella do?

Twilight Cast Interview on Oprah, May 13, 2010
It was a total screaming fest when the Twilight stars came out on stage on Oprah’s show yesterday. It went on and on until Oprah had to hush the audience. Oprah calls says the closest thing to the current Twilight phenomenon is the Beatles. She recalls screaming for Paul McCartney, and exclaims, “Now people are screaming for you!”

Victoria is back and looking to kill Bella and Edward. She’s looking for revenge and she’s going straight after Bella. Bella is the reason Victoria’s mate James was killed. She needs to inflict on Bella and Edward what she had to go through. With James, it was a game, it was a hunt, with this film it’s vengeance. There’s also a giant army of newborn vampires, the strongest vampires ever. The werewolves and vampires need each other and they’re forced to create a team.

Kristen Stewart says of Edward and Jacob, “I’m totally in love with my best friend (Jacob), but not as much as my true love who obviously is Edward. Keeping Edward at arms length and it’s the hardest thing for her to do because she’s definitely betraying true feelings for him. There’s no black and white, no easy answer. Will she give up her life, or will she give up her life?” Meyer goes on to say, “I wanted her to really look at what she was choosing and what she was giving up.”

Isabelle Swan, I promise to love you every moment, forever…..