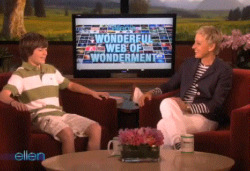 Greyson Chance’s video of Lady Gaga’s “Paparazzi” has gone viral. Google, Twitter and Yahoo are going ballistic with the sixth-grader’s YouTube video that has rocked the internet this week. Watch out Justin Beiber, you’ve got some pretty hot competition to worry about!

With over 13 million hits on YouTube in less than 3 weeks, over 15 million upload views and more than 102,000 subscribers, Greyson Michael Chance is going straight to the top. That’s if Ellen Degeneres and Lady Gaga have anything to say about it, and they’ve had plenty to say about it! In fact, Lady Gaga herself called the Ellen Show while Greyson Chance was being interviewed. The famous pop-star was tickled that Chance sang her hit song “Paparazzi” saying, “I was so excited that you covered Paparazzi,” Gaga said. “You’re so sweet and so talented, and everyone loves you so much.”

If you haven’t heard by now, Greyson Michael Chance is a sixth-grader from Oklahoma who performed Lady Gaga’s “Paparazzi” at a school talent show in Oklahoma City. His teacher and students absolutely adore him, and of course they’re thrilled that Greyson put Oklahoma’s Cheyenne Middle School on the Google Map.

Greyson’s teacher, Kelly Cheek claims, “He’s the talk of Cheyenne Middle School. It’s been insane. Our phones have been ringing off the hook. The kids are so excited, we can hardly get them to do anything but talk about Greyson.”

Lady Gaga told Greyson, “Keep following your dreams and work really hard and stay away from girls and be focused!”