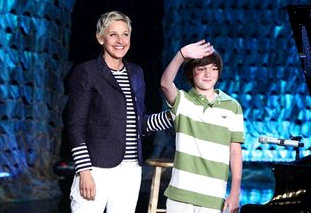 Greyson Chance vs. Justin Bieber, The War Rages on Twitter

You may remember a couple of days ago when the YouTube video of 12 year old Greyson Chance started getting talked about on the web. This is the kid that sang a Lady Gaga song while playing the piano and in turn has been generating millions of view on YouTube. This has also led to a lot of publicity, morning show appearances, etc…

But on Twitter, Greyson Chance has apparently presented a threat to current teen sensation Justin Bieber. And I don’t necessarily mean from Justin Bieber himself, but from all of the Justin Bieber fans that are on Twitter.

When you click on “Greyson” on Twitter’s trending list, you are presented with pretty much one overriding theme – everyone is comparing Greyson Chance to Justin Bieber. Some of Justin Bieber’s fans are taking offense to that, others are just pointing out some similarities.

The bottom line is that Greyson Chance, at only 12 years old, has certainly taking the web by storm and created quite the stir.

96 replies on “Greyson Chance vs. Justin Bieber, The War Rages on Twitter”

JUSTIN BIEBER IS WAYYYYYYYYYYYYYYY BETTER THAN GREYSON AND MORE TALENTED!!!!!! NO ONE CAN BE COMPARED TO HIM! I WILL ALWAYS LOVE JUSTIN BIEBER!!!!! NO MATTER WHAT! NOW I'M NOT SAYING THAT GREYSON HAS NO TALENT, IT'S JUST JUSTIN IS BETTER. AND EVEN IF GREYSON BECAME FAMOUS, WE WOULD LOVE JUSTIN MORE!!! I PERSONALLY THINK GREYSON IS A WANNABE OF JUSTIN AND HE WANTS TO GET FAMOUS LIKE HIM, THAT'S PROBABLY WHY HE DID THAT!
*I LOVE JUSTIN DREW BIEBER!*

you are a retard… greysons voice is more manlier than justin biebers.. and he's 13..

i hope you die.

ANDRES! you better watch it I'm in the same class as you mr! Be careful… Even though I like KYLE way better. SUCK IT!

asam you are a hero

adam you are a hero

how do u know it's edited? u work in the studio?

Trixie, get over it. This kid isn't a wannabe anything. He has his own talent and his own style. Meanwhile, Beiber has his cookie cutter cute boy routine going for him. Greyon's songs are deep and have actual meaning behind them…. not like Beiber's puppy love song collection. Anyone who can present a real talent, not only instrumentally but vocally as well, could outshine an a-typical vocalist like Beiber easily. I'm not saying Beiber sucks, he just doesn't have as much going for him as this boy does. Everyone wants fame, but obviously he's playing in some kind of talent show you moron. It's not like the whole school was in on this and set it all up for one boy's chance for fame. Think before you let your obsessions rant for you next time.

Whoever likes Justin Bieber was absolutely no taste. Bieber has no talent, can’t sing, and his songs are not deep and his lyrics are stupid and meaningless. He also uses auto-tune and other computer programs for his voice.

thank you someone who has some sence in their head

Personally, I think Greyson is better than Justin. I do like Justin, but I like Greyson better. His voice is more emotional while Justin's always stays the same. Greyson's music has more meaning and can relate to people. Plus, Bieber's voice is edited and Greyson's voice is naturally good. He doesn't need any editing systems. It just comes out amazing, but Justin needs a LOT of editing to sound the way it does.

Right! Greyson is talented! But im not really a fan of his, I am a fan of Bieber though and twitter definatly HAS blocked him from the TT's because everyone talks about Bieber.. Greyson wouldnt be high if Justin was on there… But hey we started to fool twitter but they found out and blocked it all :/ And Greyson is kinda trying to be Justin cause he attempted the hairflip and just failed but he has got a really good voice x

I don't recall Bieber garnering over 13 million hits in under 48 hours. Young ladies, there is no need in writing in ALL CAPS and cursing!! It shows how immature you are. I wish Greyson all the best. There is plenty of room for young artists. This whole comparison between these two young men has no grounds and is simply silly. Bieber has his career and is doing well. I hope that Greyson has a similar chance to shine. The kid has raw talent. Can't wait to see him mature into a fantastic singer/songwriter. In fact, I believe in him so much that I put up a blog about him. GreysonChanceZone.com – I certainly hope that Greyson and his parents find the site and enjoy the commentary.

this is getting out of hand. why are bieber supporters so angry? this is nonsense. greyson is talented.

you can clearly see how justin bieber is amazing and how greyson isnt.
hes just trying to be like him but no one can have justin's swagga ;)

im just saying, justinbieber is amazing and greyson chance is a wannabe :)

Personally, I think Greyson Chance has
a awesome voice and such great talent.
But for some reason , I still think Justin Bieber
is better . I just don't wanna see Justin Bieber
nowhere . :/
I wish that everyone would STOP comparing them .

Alright… Justin Bieber is really NOT all that talented but, you high-horomone girls don't see that yet… you just see Justin's hair, cute eyes, and you hear his 100 times edited voice! And you really think the lyrics "Shorty is a eenie meenie miney mo lova" are good?! Come on people… what is todays music coming too?! If that song is a big hit… I don't want anymore music to ever be made.
As for Greyson… he's only twelve and unbelivably talented! His voice is purely his own, as he performed live 4 times on youtube (school talent show, ellen show, and 2 of his own songs) and didn't have one bit of voice altering and sounded absolutely amazing! Also, he wrote two of his own songs. The song Stars especially has a vy strong meaning. (It's a bout a woman who passes away from cancer and goes up in the stars and her husband follows) What about Justin songs? They all have the same stupid meaning.. they're all about a girl.

A Justin-Greyson comparison… they are not the same! Greyson plays the piano… unlike Justin who just bangs his fist off his chest a couple dozen times saying over and over, "Baby, baby, baby, OOOOOH" Greyson has a natural voice, unlike Justin. Also, Greyson writes his own songs, which have meaning… unlike Justin.
I conclude that Greyson is a lot more talented than Justin even wishes he was. Some day, I hope you young girls develop a taste for music , because I don't want to be listening to Justin Bieber for the rest of my days.
At least give Greyson a chance. You'd be surprised at how great he is if you stopped being a "Belieber" Ugh.

Justin Bieber is a talentless loser!

Personally, I prefer Justin Bieber… I'm not trying to offend anyone here, but Justin learnt the piano, drums, trumpet and guitar all by himself. Thus apparently, he is more talented compared to Greyson. BUT, I have to agree that Greyson has a wonderful and powerful voice. He can play the piano well too, though I'm not sure if he can play other instruments. Justin has a great and beautiful voice as well AND talented in instruments. Hence, I think that Justin Bieber is more talented than Greyson Michael. :)

I have to speak up for Justin, hey, he can write his own songs. Greyson can ONLY play the piano, but Justin can play 4 different instruments. People, you don't have to insult Justin without any proof.

Justin Bieber is a talented kid, so just deal with it.

whoa wait a minute greyson chance can play the piano can justin?

yes justin can play the piano however greyson chance is our American golden boy who is probably just as good as Bieber.

but justin can also play the guitar, trumpet and drums.

Well, justin has a perfect voice. I have to admit that greyson has a powerful voice but i still think justin is better. Justin is wayyy talented, i dont see why u think greyson sounds nice singing paparazzi. Coz it sux! @Mystery

i love you andres

mhmmmm jared, you are NOT hot. You just jealous(:

wow! the truth comes out…derek hahahah anyways bieber is so better because he is hotter unlike greyson who is like 12 years old and needs to go through puburtiy…hahahah

melissa you code name isn;t that hard so get a f**king life and yes maybe so he has to go through puberity but atleast he will unlike justin g*y biever

madi sucks at everything in life

I don't think there honestly needs to be a war. About anything. Yes, Greyson has a very powerful voice and beautiful songs, but Justin obviously has lots of talent also, and how would he have been discovered if he couldn't' sing? And why would you judge people based on what celebrities they support? I don't get it. Whatever, they're both great. :)

Andres, GET A LIFE! Justin in YOUR opinion may suck but he does have feelings! He is a person too just like me and you. He had a dream just like you and me. Would I laugh at you if you sang bad. NO! Exactly. And NO JADEN JUSTIN IS NOT GAY. Jared, I will come after you and attack you in PE! You watch… YOU WATCH!

Even if he supposedly sings bad, he's got looks.

I'm not a loser. ASHLEY S LOVER. YOU ASKED HER OUT! SO YOU GET A LIFE!

YOU'RE FAT! Just like barney g*y fag. You remind me of the yellow telletubby…

SUCK THY NON EXSISTANT! anyways your an infection that asked out ashley s and eats parasites for dinner.

LEARN HOW TO RIGHT I CANT UNDERSTAND

GREYSON CHANCE I FREAKING LUV U WHATS YOUR #=)

SO LOOK UP JUSTIN.B. HES GAY

Greyson is better than Justin by a long while.
Not too long ago somebody in my homeroom brought it up,
and we all agreed Greyson was much better than that beaver.

We also agreed for a twelve year old his voice was better and much deeper than supposed 16 year old Justin ._.

Personally, I never really liked Justin, and when I saw a picture of Greyson my thoughts and my friend’s thoughts was ‘Mini Justin-Bieber’…we took back what we said once we heard his voice.

I think I like Greyson much more because I was immediately drawn to him, I just didn’t have the same effect with Justin. So anyway, I’d say Greyson is much better in my opinion

I love Greyson n justin. ther both super talented, but i think tht in the long run greyson is definitly bettr. he has a prettier voice