Why Google Is Smart To Close The Nexus One Online Store 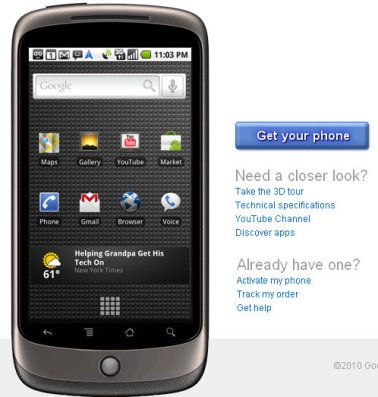 Last week Google announced they will be shutting down the Nexus One online store – the location where Google took orders for their new Nexus One mobile phone.

When exactly the online store will come down I’m not sure, (maybe someone out there has this info), but as of right now, you can visit the online store and you’ll see the Nexus One available for purchase >> Google.com/NexusOne

How Google Lost Their Way

I wrote an article not too long ago discussing how I felt that Google lost their way when they decided to become a mobile phone carrier like Verizon or AT&T.

Notice I said a mobile phone carrier! I don’t believe for a second that Google’s mistake was in launching the Nexus One mobile phone.  The problem was when they (Google) tried to become the carrier, distributor, manufacturer, and customer service representative for the Nexus One.

Google is made up of computer scientists – not customer service reps, and not even sales folks.  Quite frankly, a bunch of geeks work at Google who sit around all day (and night) developing new innovative technologies and applications. Not to mention the bread and butter of Google which is search.

When Google developed Android, the operating system that is now being utilized on multiple mobile phones and other devices (including cars), they were right in their element. Google is a master at developing systems and platforms upon which the rest of the world can run their applications.

The Nexus One, powered by Android, was a perfect example of a mobile phone running on the Android platform. And Google was keeping within their element when they opened Android up to a wide range of companies and developers.

But then Google made the mistake of trying to sell, ship, and service the Nexus One to customers via other phone carriers.

Someone at Google must have felt in their gut that launching the Nexus One store was a mistake. It was so far out of their element that someone, somewhere within Google had to sense it.

So as to be expected, whenever you try to do something where you don’t have the comparative advantage, Google failed miserably.

However, Google’s CEO Eric Schmidt will be quick to tell you that failure actually defines success.

If you’re failing, then you are in a sense experiencing success.

Almost immediately after Google launch the Nexus One, customers started complaining not only about the device, but the fact that Google’s customer service was basically absent.

So when Google announced they were closing their Nexus One online store, and in turn looking to distribute and sell the Nexus One through multiple carriers, I must say that I was proud of Google for making that decision.  And I know, me being proud of Google doesn’t really matter a hill of beans to Google… but still.

This has really been a point of inspiration to me.

But what else is inspiring, and very important to learn from, is that Google knows when it’s time to quit.

And because Google knows when to quit, it makes sense then that Google CEO Eric Schmidt defines failure as being an element of success.

Next question to be answered is why Google stopped producing the Nexus 1.

I have am using it with great satisfaction and cannot understand Google’s abandoment of this great product. If anybody knows please post.

The reason they stopped is because of the economic principle of “comparative
advantage”.

Even though, yes, Google can make the Nexus One and to a certain degree have
satisfied customers, it’s not there strong point.

I think Google’s decision to eject from the Nexus One is a great lesson for
all us – they’ve taught us to focus on what we know, what we have a
comparative advantage in, and not spend our resources on things that we are
not “scaling”.