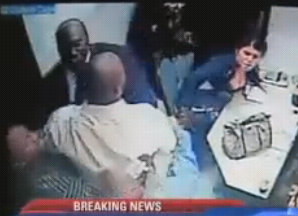 Vince Young has found his way directly to the top of the news headlines. Vince Young has been issued a Class C assault citation in Dallas from a fight he was in at a Dallas night club last night (Sunday, June 14th). According to local Dallas news sites, Vince Young was the “prime suspect” in a fight that left the other guy with “bodily injuries”.

The AP reports that no arrests are planned.

The fight broke out at a Dallas strip club early Sunday morning after someone at the club flashed a disrespectful sign at Vince Young that was taken as a direct insult of his (Vince Young’s) alma mater – The University of Texas.

Here’s is the video of Vince Young attacking the guy at the Dallas club:

It is believed that Vince Young will want to leave Tennessee if he does not return as the starting quarterback for the Tennessee Titans. The incident of this Vince Young fight will certainly bring some form of a punishment from the NFL directly. Exactly what that will be is yet to be seen.