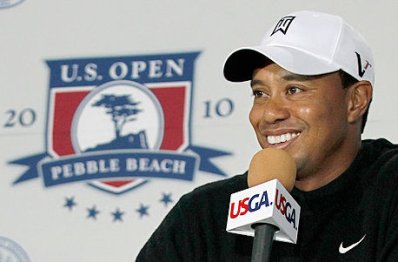 The US Open Golf Tournament is set to begin on tomorrow, Thursday, June 17th. The tee times have been released (see below). All of the tee times released are in Pacific Standard Time since the tournament is being played in Big Sur, California.

As usual, all eyes will be on Tiger Woods who is continuing his comeback. Woods, who has struggled with a neck injury of late, will tee off at 4:36 p.m. EST along with Ernie Els and Lee Westwood in one of the most star-studded groups of the opening round of play. Woods is returning to the scene of one of the greatest performances in professional golf history, where he blew away the field at the 2000 U.S. Open en route to a 15 shot victory.

Els struggled and missed the cut at the Memorial, but he already has two wins to his credit this season and is No. 1 on the PGA Tour money list.

Phil Mickelson, fresh off his inspired victory at the Masters, will begin play at 11:06 a.m. EST with Padraig Harrington and Y.E. Yang. A U.S. Open win by Mickelson would make him the No. 1 player in the world. He could still take over No. 1 in the world if he finishes as low as third, depending on where Woods finishes.