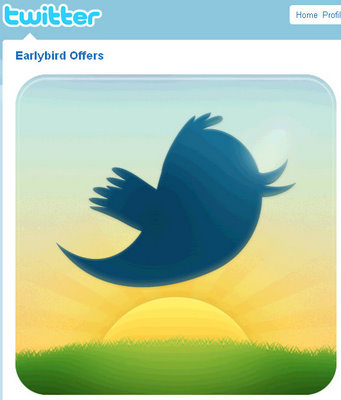 Twitter is officially launching @EarlyBird today with a special deal for tickets to The Sorcerer’s Apprentice, a film from Walt Disney Pictures. The deal offered through @EarlyBird is this – enter “APPRENTICE” at checkout on Fandago and you’ll receive two tickets for the price of one.

According to TechCrunch, “we originally thought that EarlyBird woud be a competitor to deal sites like Groupon and Gilt but it turns out that it’s actually a complimentary channel. Twitter has halso posted an FAQ about the new feature. Interestingly, Twitter says it is “starting with US-wide offers but will explore location-based deals in the future.”

I guess Twitter will increase it number of customers with this new system.