Imagine being able to take the Facebook updates of all of your friends – to include comments, photos, videos, etc… – and organize all of the comments into one easy-to-read, magazine style layout that is easy to navigate. With something like this, you could read your Facebook friend’s updates just as easily as you would read your favorite magazine.

Well now this is possible with a a new app for the iPad that was announced yesterday via All Things Digital called Flipboard. Flipboard is attempting to make the social networking universe more accessible, consumable and, perhaps most importantly, visually arresting via a rich app on the Apple (AAPL) iPad. 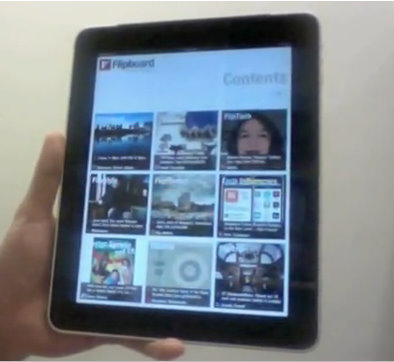 Essentially, Flipboard pulls information from sites such as Twitter and Facebook data streams and then reassembles it in an easy-to-navigate, personalized format in a mobile tablet touchscreen environment.

I really like this concept because as you know, when you sit down at your computer and pull up Facebook you have to scroll down one big long list of your friend’s updates. Being able to organize updates by comments, photos, and videos would be helpful in and of itself. But then being able to browse all comments in magazine style format would be even better.

I don’t really care too much about doing that for my Twitter followers, except to maybe help me get news and information faster. But for Facebook, it sounds like a great app that would actually make being on Facebook more fun.

Of course, you need to get yourself an iPad first!

Here’s a video promo for Flipboard – the new iPad app that turns your social networks into a magazine style layout: