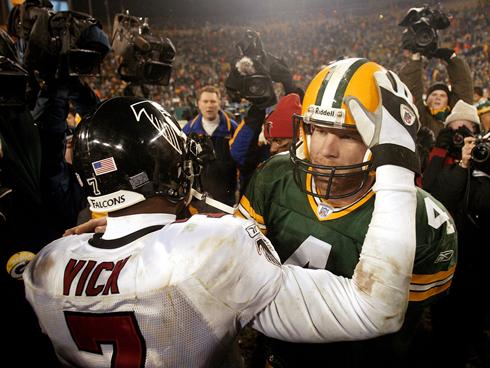 And here we go… the NFL lockout is finally over, and with that launches the good ol’ off season Brett Favre gossip.  Except this time, there isn’t even a hint of retirement in the conversation.  It’s more a conversation that seems to have relinqueshed any thoughts of Brett Favre being starter, and has Favre accepting the downgraded position of a backup quarterback.

And who could possibly be the starting the quarterback in front of Brett Favre?  Wait a minute, did I actually just type that???

Well, none other than Michael Vick at the Philadelphia Eagles.

That’s right folks, the Philadelphia Eagles may be interested in signing Brett Favre as a backup quarterback to Michael Vick.  And this is something that Michael Vick would find to be honor.

According to the USA Today, Michael Vick tweeted the following:

“I would be honored to have Brett Farve as a backup. That will be amazing Learning how to toy with defenses the way he did his whole career.”

It could be that Michael Vick sent out that tweet about Brett Favre coming to the Eagles, but then later was instructed to take it down.  This would not seem to far out of line given the fact that it could be news that the Eagles’ organization did not want out quite yet.

Too late for that now…

So here we go – the NFL off season is official upon us and Brett Favre rumors are swinging into high gear… I love it!