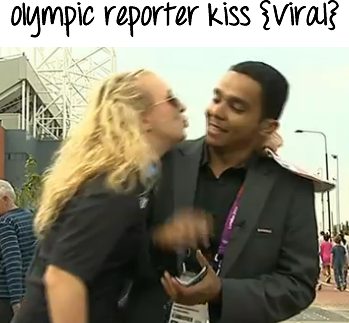 Out of all things going on with the Olympics, the recent Olympic Reporter Kiss has spread rapidly.  It’s nothing too crazy, but it’s kind of funny.  This Arab Journalist is reporting live at the Olympics as a woman runs up to him and says, “thank you”, then lays a big kiss on him before running off.  He laughed through the rest of his broadcast in shock as other spectators waved flags behind him.  Sound distracting to be a reporter, doesn’t it?