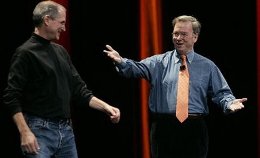 Earlier today we wrote about the breaking news that Google launched a Google Maps Navigation app for their Android 2.0 OS – which will be available on the Motorola Droid phone via Verizon on November 6th.

Google said it would also like to support the iPhone with Google Maps Navigation.

Google’s Response to an iPhone App

According to AppleInsider, Google said:

“Apple is a close partner.  Millions of users experience Google Maps on the iPhone. We will continue to work with Apple to bring innovation, including Latitude and Navigation, to users but you’ll have to speak to Apple about availability.”

What I love about Google is that they do not rely on the approval of one platform approving what they can and cannot bring to the market place.

Just like the Google Voice iPhone App debacle between Apple, AT&T, and the controversy over not approving the Google Voice app, Google Maps Navigation’s future on the iPhone will be up to Apple.

For iPhone’s, and Apple’s sake, I sure to do hope they’ve learned their lesson with the Google Voice iPhone App and let the iPhone become an open source environment for user friendly applications.