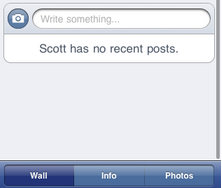 The most popular iPhone App that the App Store has ever seen is Facebook 3.0.

Unfortunately, as you may have noticed if you’re a user, the the app is down.

The message you might be seeing, especially if you are an admin on to a Facebook Fan Page, is “there are no updates available” or “USER has no recent posts.”

TechCrunch has been on top of the story from the beginning, and they clearly state the reason for the Facebook App being broke:

“10 days ago, Facebook developer Joe Hewitt rocked the iPhone development world when he announced that he would stop making iPhone apps because he was fed upwith the way Apple is running the App Store. This is significant since Hewitt was pretty much solely responsible for one of the most popular (and best) iPhone apps out there: Facebook’s. And now, just a little over a week later, we may be seeing the downside of Hewitt’s decision.”

All of these issues are directly impacting Facebook Fan Page management on the iPhone as well.

This is particularly troubling because the iPhone was the only device that facilitated an easy way to manage Facebook Fan Pages on the run.

How Long Before It’s Back Online

In the same TechCrunch article, there are updates being added to the story.  One of the udpates state that there is now a team of engineers working on the issue, and they’ve identified the problem with as an API issue – not directly associated with the iPhone app itself.