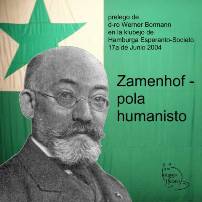 L. L. Zamenhof believed that to a degree, the inability of foreign nations to communicate effectively contributed to disputes, wars, and violence.

Google is taking strides with technology to allow people who speak different languages to efficiently communicate.  However, Google isn’t trying to invent a new language to make this happen – Google is utilizing translation technology and the Internet!

One example of Google’s language translation efforts is “Rosy“.  Rosy is technology that is currently integrated with Google Wave, and it is designed to allow people who speak different languages to be able to communicate in real time.  I wrote about Rosy here.

Rosy is nothing less than amazing!  Imagine this – you are chatting with someone in Germany who only speaks German – and you only speak English.  With Rosy, as you type your words to your German friend in English, your words are automatically translated into German on your friend’s computer.  And likewise, as your German friend replies to your message, and he replies in German, your message is automatically translated into your English language.

Yes – I’m sure that L. L. Zamenhof would be proud!