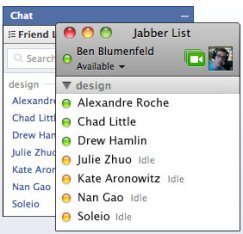 Facebook Chat used to be nothing more than an additional form of communication that was tucked away in the lower right hand corner of Facebook.  But now, Facebook Chat has really stepped it up by allowing you to integrate the chat functionality directly onto your desktop.  This new Facebook Chat feature allows you to connect and chat with all of your Facebook friends, right from your desktop, even when you are not logged directly into Facebook.

Facebook’s David Reiss made the announcement today via the Facebook blog about the new Facebook Chat functionality.  He explained that, “…we believe you should be able to connect with your Facebook friends everywhere. We’re happy to announce that now you can with Facebook Chat. Starting today, the more than two billion chat messages sent on the site every day can be sent from your favorite desktop instant messaging client.”

Facebook has been on a role with new upgrades.  Over the past week, Facebook has been rolling out new features to their site that put a huge emphasis on search, and also made emailing and communicating more efficient.  There’s even been rumors that Facebook might offer their own POP/SMTP email client called Titan.

All of this seems to be directed at getting users to login to Facebook, and then not have any logical reason to ever log out.

One competing force to be reckoned with however is Google’s Gmail platform.  Just today, Google rolled out Google Buzz.  This is a social networking and messaging system that is directly integrated into your Gmail client.  Google Buzz is designed to do the exact same thing that Facebook seems to be shooting for – once you login, to keep you logged in as long as possible.

Gmail has a powerful chat functionality that allows you to chat via text, voice, and even video.  The new Facebook Chat desktop client seems to be a step toward Facebook competing with Gmail, however, Gmail already has a great desktop client called Google Talk.

So the battle rages on, and I say let them have it.  Because the more competitive Facebook, Google, and Twitter become, the more you and I benefit with amazing applications – all of which is designed to win your attention on the web!