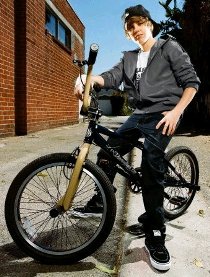 Regardless of which why your emotions sway about Justin Bieber, just remember ya’ll, he is still just a kid after all (wow, did that rhyme?).

Justin Bieber does, regardless of how you feel about him, command a lot of attention from people beyond just his screaming teenage girl fan base. He has met President Barack Obama three separate times – and performed for him (I think) each time they met.

Plus he is the youngest kid in history who has ever been recommended to actually host Saturday Night Live – let alone having a leading role on the late night TV show.

All of these, and more, prove that even though Justin Bieber is a pop sensation like so many before him, he is commanding the attention of some pretty high profile individuals – not to mention the hundreds of millions of screaming fans that following him everywhere he goes.

Here’s a funny video commentary on Justin Bieber. This video is rediculously popular on YouTube with well over 2.6 million views.