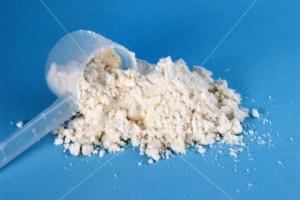 The protein myth, has been floating around for generations. Historically, it can be traced to Milo of Crotona in the sixth century B.C. He was a famous Greek athlete who was considered to be one of the strongest men in ancient Greece. He had won wrestling victories in 5 Olympic games as well as in other sacred festivals. Legend has it that Milo applied progressive resistance in the form of lifting a growing calf daily. By the time the calf was 4-years-old Milo carried it the length of the Olympian stadium, and then proceeded to kill, roast and consume it. Milos’ daily consumption of meat was recorded at approximately 20 pounds a day.

When we fast-forward to the era of the sixties and seventies we find there was a renewed hype about protein being some sort of miracle food. This was due, largely, to the muscle magazines of the era which pushed protein and claimed it could make you grow as big as a god! As a result, many bodybuilders and strength trainers started to consume large quantities of whole milk, meat and eggs. (Let’s not forget the raw eggs—thanks to “Rocky Balboa”.) During the 90’s and into the present we’ve seen protein powders promoted as the new wonder-drug. Ads and commercials continue to tempt consumers to purchase protein powders in garbage can-sized quantities. And we’ve been mesmerized by a constant flow of ultimate protein shakes that will supposedly help pack on muscle mass at almost the same rate as Anabolic Steroids.

Clearly, science is being placed on the back shelf, and this has resulted in a host of myths and fallacies springing up in the field of sports nutrition. It’s no surprise that there’s so much conflicting information and plain misinformation floating around. On one side we have the nutritional, dietetic and medical community laying blame on the bodybuilders, weightlifters and strength trainers for perpetrating the myth that strength athletes need to consume above and beyond the RDA (Recommended Dietary Allowance) of 0.8 grams per kilogram of lean bodyweight (1 kilogram=2.2 pounds). Then we have the bodybuilders and strength trainers holding the nutritionists, dieticians and medical community responsible for bad information. The question remains, what is the optimal protein intake required for natural weightlifters, bodybuilders, strength trainers and other athletes?

Protein’s Role
Protein is a complex chemical structure of carbon, nitrogen, hydrogen and oxygen. Accounting for 50% of the body’s dry weight, it has been estimated that humans consist of 50,000 different proteins. From the simple blink of an eye to the flow of blood to muscles under extreme stress, proteins are everywhere. Their function involves more than muscle tissue repair. It includes repair of red blood cells, hair and fingernail growth, regulation of hormone secretion, movement (muscle contraction), digestion, maintenance of the body’s water balance, protection against disease, transport of nutrients to and from cells, the carrying of oxygen and regulation of blood clotting. So the role of protein is very important to over-all body function and health. Sadly enough, this role has been improperly depicted in various muscle magazines, on TV fitness shows and in claims by trainers and bodybuilders who think protein is mainly used to repair damaged muscle tissue. This couldn’t be further from the truth.

Protein Intake
As mentioned earlier, the RDA is 0.8 grams per kilogram of lean bodyweight (U.S. Food and Nutrition Board, 1980) for sedentary adults. For infants and children the RDA is doubled and tripled because of the rapid growth rate they experience. How did the researchers come up with this RDA and arrive at the figure that has been shunned by the bodybuilding community? Studies using nitrogen (a component of protein). have been conducted to see how much protein is used and absorbed before an excess condition results. Researchers looked at the nitrogen balance and made comparisons to see if a positive or a negative balance had been occurring. They observed the outcome by comparing the amount of nitrogen excreted with the amount ingested, and then they determined whether or not protein was accumulating in the body, remaining at the same level, or decreasing.

The nitrogen balance test uses nitrogen loss in the form of sweat, urine, feces, shedding of skin, and loss of hair on a day-to-day basis. If there is a positive balance in nitrogen levels, it means there has been more nitrogen ingested than excreted, and so, tissue growth can be a direct result. A negative balance shows researchers that more nitrogen is being excreted than taken in, and this means, of course, that more protein is being lost than produced. Basically, the protein requirement for sedentary adults involves replacing routine losses—the task, so to speak, is to keep the leaky bucket topped up.

So why did researchers in North America come to the conclusion that the RDA is only a rationed 0.8 grams per kilogram? Well it seems they concluded that 0.36 grams per kilogram of lean bodyweight in protein is lost per day. With a safety margin in place, it has been bumped up to 0.45 grams per kilogram of lean bodyweight, and then bumped up again to approximately 0.75 grams per kilogram. This is to replace the amount which may be lost during digestion, as well as making up for a lack in quality of protein. The general protein requirement for sedentary adults is just enough that if one follows this guideline they will supply themselves with enough amino acids to replace each day’s loss without allowing for exercise and the growth of muscle tissue. It’s ironic that the RDA for children (who are experiencing growth) is greater than the RDA for adults. The Academy of Sciences and the nutrition board insist that exercise (which leads to musculo-collagenous hypertrophy among other changes in the body) doesn’t generate an increase in one’s protein requirements (1). Note that RDA can vary from place to place; Russia, Denmark, and Britain have different RDA standards.

Another study conducted at the Letterman Army Institute of Research in San Francisco showed that subjects on a higher protein intake (2.8 g/kg/day), coupled with intense strength training, gained a whopping 3.28 kg (7.2 lbs) of lean mass. The study was done over a 40-day period and the subjects were trained to near exhaustion (2). Another study of weightlifters over a 3 month period, with the protein increased from 2.2g/kg/day to 3.5 g/kg/ day, resulted in a 6% increase in muscle mass and a 5% increase in strength (3). Susan M Klieiner, who holds a PhD in nutrition and human performance from Case Western Reserve University, states in her book, Power Eating, that for muscle building an intake of 1.6-2.2 grams per kilogram of bodyweight is recommended. Dr Michael Colgan, in Optimum Sports Nutrition, claims that the RDA doesn’t meet the needs of athletes who train in an intense fashion. So, the evidence provided by some of the highly regarded “experts” in this field indicates that the addition of extra protein has been shown to display positive effects which produce muscle growth.

Negative Effects Of Protein
So why all the fuss about the ingestion of too much protein? So far, we’ve seen protein’s positive effects and that it can be beneficial for hypertrophy of the muscle complex. A common argument raised is that excessive protein, as described above, can cause a variety of body ailments–such as kidney and heart disease, constipation, and osteoporosis. These are often cited as the main reason one would want to steer clear of a diet rich in protein (4).
The average person reading about this might want to jump on the anti-protein bandwagon, but what they don’t realize is that these studies often mislead. For starters, the negative health claims of kidney disease resulting from a high protein diet have used information gathered from studies done on patients with existing kidney problems. Kidneys are responsible for excretion of the urea formed from ammonia (a very toxic compound) which comes from the protein in our diet. People with kidney problems already have trouble excreting urea, and this leads to more stress on the kidneys. The logic goes that strength trainers, bodybuilders, weightlifters and athletes who eat a high protein diet are doomed to suffer from future kidney problems. Furthermore, there don’t seem to be any peer-reviewed studies done on healthy athletes, strength trainers, weightlifters or bodybuilders showing that kidney problems are a result of a high protein diet. As for the claims of osteoporosis in these groups, it’s hard to believe that they cancel the benefits of exercise. Exercisers have strong, healthy bones that are denser in nature, and studies have shown that exercise promotes this condition. Negative results may be seen in those who are sedentary and consume a high protein. For the most part, however, one cannot simply isolate one factor and claim that this is a reason for a health problem such as this; the pathology of osteoporosis involves far more than one variable. Things such as heredity, genetics, micro and macro nutrient intake, exercise etc., when taken together, are far more responsible than simply applying the blame to one area.

Constipation is also used as an argument because many nutritionists and dieticians claim that diets high in protein are low in fiber. Without enough bulk the digestive system can slow down to a snail’s pace. Simply choosing the right foods such as fibrous vegetables, starchy breads, pastas and drinking plenty of water will remedy this problem. Heart disease may result from a high intake of animal, but, as mentioned earlier, knowing how to use variety in one’s diet will help eliminate worry about this kind of problem. Low and no-fat dairy products, fish and lean cuts of meat and chicken are good choices which considerably lower the risk of heart disease.

High protein intake, as we’ve seen, is not the evil it’s made out to be. A protein deficiency will reveal itself because strength and muscle mass will decline. What are the signs of taking too much? Inflammation of the kidneys (lower back pain) and feelings of malaise are symptoms to watch for. Most of the time the body does a good job of sorting and using protein, so most people will not run into this problem. But even if protein intake is increased it means eating multiple meals throughout the day since the experts have said we can only digest 25-30 grams of protein per sitting. The small intestines can digest as much as 500-700 grams of protein (5) keeping in mind proteins functions do include other things other than soft tissue repair. New research has shown now that the body may in fact be able to handle much more protein in a sitting (6). This obviously shows us that individuals of varying bodyweights can take in much more than the 25-30 gram figure the experts have held us to for so long.

Conclusion
Hopefully you’ve been convinced that a high protein intake is not “evil.” Protein intake ranging from 1.4 grams of protein per kilogram of bodyweight to one gram per pound or more can be beneficial for an individual involved in an intense training program. Protein has been typecast as something that will make you big and strong, but muscle growth is not controlled by the level of protein one takes; rather it is the growth demand caused by intense training or stress that will ultimately determine how much protein one should take in. Dr Michael Colgan says, “No one ever grew an ounce of muscle from simply gulping protein. Muscles grow from pushing poundage—period.” Some trainers have testified that they’ve done just fine by taking in small amounts of protein, but the question to them is, how much greater would the results have been if they had increased the protein requirement to meet the demands of the exercise?

We don’t have to consume an extraordinarily amount of protein, but the proof of the pudding is that taking more than the RDA when exercising is not only safe, but beneficial.