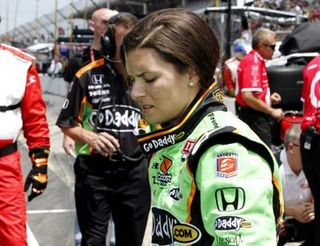 As she exited her car after her first Indianapolis 500 pole day qualifying attempt on Saturday,Danica Patrick was frustrated.

So frustrated that she threw her crew under the bus. “This is the worst car I’ve ever had,” she said, according to USA Today’s Nate Ryan on Twitter. “There’s no stability or grip. It’s just scary, really scary … It’s awful, really awful. I think I’m still shaking.” And when her commentswere played over the track PA, she was booed.

Danica Patrick, IndyCar’s most popular and visible driver, had to fight back tears and was shaking after qualifying 23rd for the Indy 500 with her only run Saturday.

She has been having problems controlling her GoDaddy.com car at the famed racetrack during practice this week. When the public-address system broadcast her criticism of the car’s setup, fans voiced their displeasure.

“I say one confident thing out there, that it’s not me, and everybody boos me,” she said. “I don’t know, maybe they were booing me before, but some of them were probably cheering for me before. I’m not a different driver than I was five years ago.”

“Shoot! I say one confident thing out there that it’s not me, and everybody boos me,” Patrick said after being asked about the confidence in her race car. “I’m blown away. These people, I mean, I don’t know, maybe they all booed me before. I would think that some of them have probably cheered for me before, and I’m not a different driver than I was five years ago.”

To back that up, Patrick remembered back to a frightening moment she had in the first corner of her first-ever qualifying lap at IMS in 2005.

“I don’t know if those people were here five years ago, but I got loose in (turn) one and caught it and kept my foot down,” said Patrick, who finished third last year. “I can drive a loose car, but this is beyond.”