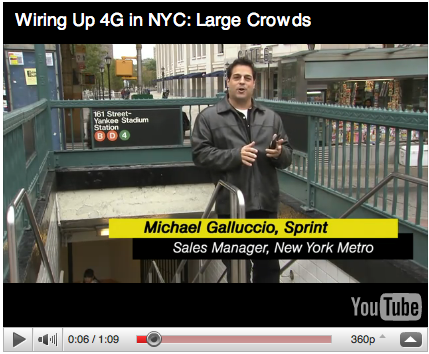 The question now is, when will Verizon start flexing their 4G network muscles – and AT&T as well – and start taking a chunk out of Sprint’s aggressive expansion of their 4G network throughout the Unites States.

Sprint 4G Now In 61 markets throughout the United States

Here’s the announcement made by Sprint via their community platform back on November 1st:

For a behind-the-scene look into how Sprint got all five boroughs of New York City and parts of New Jersey and Long Island ready for its 4G network, please visit our three-part video series, “Wiring up 4G in NYC.”

The latest installment takes a look at How Sprint plans on making 4G work in some of NYC’s most crowded and  popular spots, including crowded stadiums. How coverage and capacity  supports high-usage applications like video chat, video streaming and or  sending pictures out from the stadium.